Picture of Luke from Google Images

To begin our series on “The Lessons from the Birth of Jesus Christ” based on the Gospel of Luke, let me start with a short reflection on the life of Luke, the Evangelist, Physician, Historian and Close Companion of the Apostle Paul in most of his missionary journeys.

Luke was a Gentile, born and converted in Antioch, Syria. Proof that he was a Gentile can be found in Col. 4:10-14 where Paul excluded him from the Jewish Christians Aristarchus, Mark and Jesus Justus and associated him with the Gentiles. Some writers consider him to be a Hellenist (For a discussion on Hellenism, read: Hellenism: A Case of Cultural Diffusion), because of his expertise in the Greek language. “The Greek style of Luke, together with that in the Epistle to the Hebrews, is the most refined in the New Testament” (Gundry: 206). His name Luke is Greek (λουκάς, Loukas)) which means “light-giving.” (Strong-Lite)

He is one of the four evangelist who authored the four Gospels of the New Testament. His contribution was the orderly account of the “development of Christianity from the birth of its founder to the arrival of its greatest missionary in Rome” (Bridgeway). The first volume of that work is known as the Gospel of Luke and the second volume is the Acts of the Apostles. Moreover, Luke was not just an evangelist, he was also a doctor, historian and close companion of the Apostle Paul especially when Paul was awaiting his execution in a cold and lonely prison.

In the Epistle to the Colossians 4:14, the Apostle Paul calls him “the beloved physician” (KJV). This description is supported by Luke’s frequent use of medical terms.

Peter’s mother-in-law’s “high fever” in Luke 4:38. Luke’s account mentioned “high” fever (NIV) or “great” fever (KJV), a term that does not appear in the accounts of Matthew and Mark, “When Jesus came into Peter’s house, he saw Peter’s mother-in-law lying in bed with a fever (Mark 1:30); Simon’s mother-in-law was in bed with a fever (Matt. 8:14). The term “great” is μέγας which is “used of intensity and its degrees like with great effort, of the affections and emotions of the mind, of natural events powerfully affecting the senses: violent, mighty, strong, or simply put ‘great’” (Strong-Lite). Luke used this term in order to distinguish it from a common or slight fever.

In the parable of the Good Samaritan (Luke 10:25-37), he mentioned a remedy or first aid used all over the East (JFB) in cases like what the man suffered from the hands of the robbers in the parable. He specifically mentioned, the use of wine to cleanse the wound and oil to lessen their pain.

In Luke 14:1-4, Luke recounted, “One Sabbath, when Jesus went to eat in the house of a prominent Pharisee, he was being carefully watched. (v. 1, NIV). That is, his critics wanted to see if he will cure “a certain man before him which had the dropsy” (v.2, KJV [italics mine]). Luke used a medical term which occur nowhere in the Bible but was probably frequently used in the medical circles during his time. Strong-Lite, gives an etymology this medical term. Dropsy is derived from the Greek word ύδρωπικός, hudropikos from a compound of ῠδωρ ῠδατος, hudōr hudatos which means “water”. The NIV renders, “a man suffering from abnormal swelling of his body.” (Italics mine). Thus, we can infer that the man was suffering from abnormal swelling of the body due to excessive water or fluid in his body tissues.

The account in Acts 28:7-9 is another example of the usage of medical terms in Luke’s writings. Paul on his voyage to Rome, experienced a shipwreck on the island of Malta. While in they were there, Paul and his companions were welcomed by Publius, the island’s chief official to his estate. They stayed there for three days. It happened that Publius father was sick. Luke specifically stated that the father was suffering from “fever and dysentery” (NIV). According to the Strong-Lite, dysentery is a “bowel ailment.” Paul prayed and laid his hand on him and he was healed. The news about the healing of the chief’s father probably spread throughout the island so “the rest of the sick on the island came and were cured.” (NIV)

These are just some of the passages that prove Luke to be a physician. Through the use of medical jargon he gave us a detailed and deeper look at some of the healing miracles in the New Testament.

First and foremost, I acknowledge the possibility that Luke did not intend to be dubbed a historian. His purpose is to provide Theophilus with an orderly account of what transpired in the life of Jesus and the church. However, it will be noteworthy to consider him as one, for the following reasons stated below.

Luke begins his gospel with the following remarks,

“Many have undertaken to draw up an account of the things that have been fulfilled among us, just as they were handed down to us by those who from the first were eyewitnesses and servants of the word. With this in mind, since I myself have carefully investigated everything from the beginning, I too decided to write an orderly account for you, most excellent Theophilus, so that you may know the certainty of the things you have been taught. – Luke 1:1-4, NIV –

He used primary sources (eyewitnesses) of historical information about Jesus, a method used by historians. These documents circulated among the communities of faith at that time. Luke acknowledged the reliability of these documents because they “were handed down to us by those who from the first were eyewitnesses and servants of the word.” An equally significant fact is that Luke recognized that these things have been “fulfilled among us” that is, the things Jesus taught and accomplished. There is a disagreement as to the date of the writing of Luke’s Gospel. Some say it was written before the death of Paul while some suggest a date after the fall of Jerusalem in 70 A.D because of his use of the Mark’s material (Fee & Stuart: 286). Notwithstanding this differing views, it is clear that the accounts Luke were referring were not from the distant past. If it is not from a dim past, then the proof were still fresh and evident. There was even a possibility that Mary, the mother of Jesus, some of brothers, and some of the disciples were still alive during the time of Luke. He may have interviewed these persons as part of his investigation and research.

With this types of sources, Luke grabbed the opportunity to write a historical account of the beginnings of Christianity.

As to his second volume, the book of Acts, Fee and Stuart have a very remarkable suggestion:

“…Luke was a Gentile, whose inspired narrative is at the same time an excellent example of Hellenistic historiography, a kind of history writing that had its roots in Thucydides (ca. 460 B.C. – 400 B.C.) and flourished during the Hellenistic period (ca. 300 B.C. – A.D. 200). Such history was not written simply to keep records or to chronicle the past. Rather, it was written both to encourage or entertain (i.e., to be good reading) and to inform, moralize, or offer an apologetic.) At the same time, of course, Luke had been greatly influenced by his reading of, and living with, the Old Testament narratives, so that this kind of divinely inspired, religiously motivated history is also evident in his telling of the early Christian story.”

What sets apart Luke’s historical account from the Hellenistic historiography is that he acknowledged the power of the Holy Spirit at work in every facet of history. Although I am open to the idea that Luke did not desire to be a historian, his work made him a skilled one.

Luke, as close companion of Paul, the Apostle

He joined Paul in Troas during Paul’s second missionary journey. Acts 16: 11, indicates that he was with them, through his use of the first person plural “we”. “From Troas we put out to sea and sailed straight for Samothrace, and the next day we went on to Neapolis.” Luke travelled with Paul to Philippi (Acts 16:12, 16) but stayed there while Paul and his party resumed the voyage. This is indicated by the use of the third person plural “they” in Acts 17:1. It is apparent that he stayed longer in there and when Paul passed through Philippi on his way to Jerusalem, Luke rejoined Paul’s company (Acts 20:5-6, the pronoun “us” is used and the use of “we” is renewed).

From that point Luke kept close to Paul. That would explain why he was able to write a detailed account of what transpired during the voyage to Palestine and the events that occurred in Jerusalem and Caesarea (Acts 20-26). They remained in Palestine for about two years (Acts 24:27) and Luke obviously, grabbed this opportunity to go around to research, investigate and gather information on the life of Jesus which he used in writing his Gospel.

During Paul’s final and eventful voyage to Rome Luke was still there (Acts 27:1; 28:16). He stayed with Paul in his two years of imprisonment in Rome (Acts 28:30; Col. 4:14; Philemon 24).  During Paul’s final days awaiting his execution after being released and recaptured, Luke was there with him in a cold and lonely prison (2 Tim. 4:11). (Bridgeway) 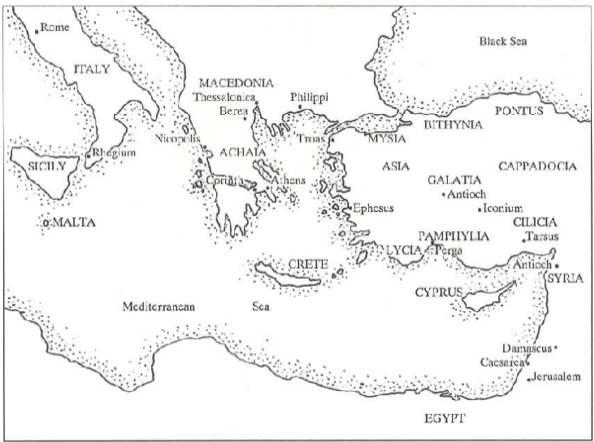 This is a proof that Luke is a close companion and a friend to Paul especially when he was old and ready to be executed by the Roman government. What an example of a co-worker and a friend who will never leave you even in the darkest of times!

(Next on our Series on “The Lessons from the Birth of Jesus Christ,” The Announcement to Zacharias)

MySword for Android. Bible App for King James Version of the Bible, Strong-Lite and JFB. www.mysword.info