Recently, a video of certain Christopher Gayoba a pastor of River of Life International Ministries circulated on social media. The video features Gayoba trampling on the image of the Santo Niño saying that it has no power and must be destroyed and buried. The video went viral and the pastor apologized for what he did. “Sinira ko ang part ng inyong paniniwala so heto ako, humihingi ng patawad sa buong mundo at sa lahat ng na-hurt sa pag-apak ko,” he said. (Pastor apologizes for crushing Sto. Niño image underfoot, gmanetwork.com).

The River of Life International Ministries released an apology letter and assured the public that they will sanction the pastor.

“Excerpts of the letter say, “We apologize from the bottom of our hearts regarding the recent video that was posted by one of our outreach pastors…Please understand that the video he posted does not represent our beliefs or our theological stand regarding idols and graven images.”

The incident can be considered a manifestation of ethnocentrism or evaluating behavior or practices based on one’s standard. Ethnocentrism is a sociological term which refers to the belief that one’s own culture is superior to all others. This means viewing the rest of the world through the narrow lens of one’s own cultural perspective (Ferraro and Andreatta). This is dangerous in the sense that it leads to discrimination one or more groups of people against others who have different ways than theirs (www.religiousforums.com)

When applied to religion, it means judging other religious people using one’s own religious standards. Religion is an important component of society, through it we are able to understand a person’s culture because each religion consists of values, beliefs, and symbols (www.religiousforums.com). When members of each religion use ethnocentrism to evaluate other religions conflicts and discrimination will arise.

On the other hand, the term cultural relativism is the notion that any part of a culture (such as an idea, a thing, or a behavior pattern) must be viewed in its proper cultural context rather than from the viewpoint of the observer’s culture. Rather than asking, “How does this fit into my culture?,” cultural relativists ask, “How does a cultural item fit into into the rest of the cultural system of which it is part?” (Ferraro and Andreatta) Cultural relativism denies the idea that a culture contains a set of absolute standards by which other culture can be assessed. Relativism helps people understand why other human beings think and act the way they do.

It “asserts that an observer cannot apply the standards of one culture to another culture, at least not in an informative way. A phenomenon in a culture must be understood and evaluated in relation to, relative to that particular culture” (Eller). By doing so, hasty conclusion, misjudgment and misunderstanding will be avoided.

Religious relativism means that the correctness of a religion is relative to the worldview of its community of adherents. Every religious tradition is composed of various experiences and mutually incompatible truth claims, and the traditions are themselves rooted in distinct worldviews that are incompatible with, if not contradictory to, the other worldviews (www.iep.utm.edu). This means that person’s worldview determines how he understands and experiences Ultimate Reality. Thus beliefs and experiences are relative.

Going back to Gayoba’s action, he viewed the image using his own religious and theological standards as powerless and therefore useless that’s he crushed it (ethnocentrism). The adherents to the devotion to the Santo Niño were hurt because for them it was a show of disrespect, insult and discrimination (based on Netizen’s comments).

On the other hand, in the Second Vatican Council of Nicaea (787 A.D.), the Roman Catholic Church justified the inclusion of painted and carved figures in her services. It says, “Adoration is rendered to God, veneration, to the saints. Homage is paid to an image not for its sake but for the holy personages represented.” Furthermore, in 1550’s at the council of Trent (1545-1563), in response to the Protestant revival of the issue, the church iterated her Nicene stand, adding further, “In images, there is no deity or power on account of which we pray to them or entrusted them with petitions. Images enhance the homage we pay to what they represent: the divinity of Christ and virtues of the saints” (papalencyclicals.net) Read more. Click here: Painted and Graven Images as Representation. 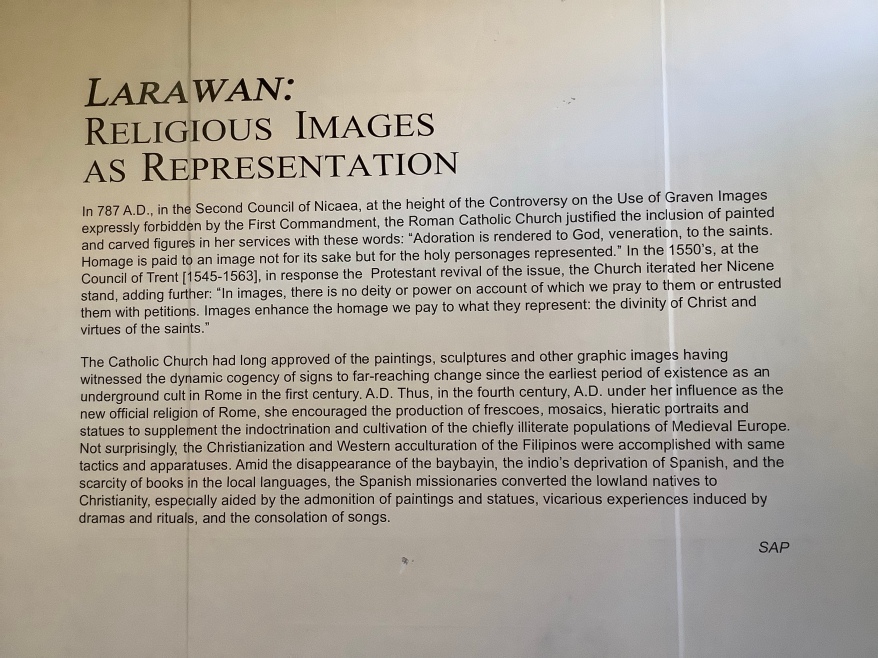 Viewing the Devotion to the image of the Santo Niño and other Catholic Church images for that matter, using the cultural and religious context mentioned above (relativism) will result to better understanding, respect and religious tolerance, so that no incidents such that of Christopher Gayoba will happen again in the future.