Friend of a Jewish Carpenter.

Message of the Day: We Are United In Christ and Are God’s Children

"You are now children of God because you have put your trust in Christ Jesus. All of you who have been baptized to show you belong to Christ have become like Christ." (Galatians 3:26-27, NLV)

Message of the Day: Resurrection – A Glorious Entrance Into Something New

"We believe that Jesus died and rose again. When he returns, many who believe in him will have died already. We believe that God will bring them back with Jesus." (1 Thessalonians 4:14, NIRV) 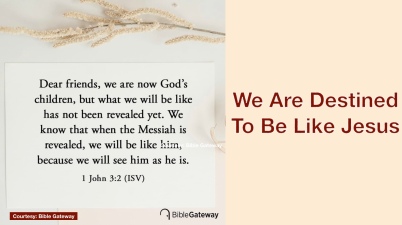 Message of the Day: We Are Destined To Be Like Jesus

"Dear friends, we are now God’s children, but what we will be like has not been revealed yet. We know that when the Messiah is revealed, we will be like him, because we will see him as he is." (1 John 3:2, ISV)

Message of the Day: The Chief Happiness and the Highest Honor is to Obey the Word of God

Message of the Day: He Must Increase and I Must Decrease

"He must increase and I must decrease" (John 3:30, CEB), were the last words that we have from John the Baptist. He went on to imprisonment, suspense, martyrdom, while Jesus grew in popular favor up to his passion and death.

Message of the Day: May God Endow Us with Grace to do His Will and to Keep His Commandments

"Now may the God of peace who brought up our Lord Jesus from the dead, that great Shepherd of the sheep, through the blood of the everlasting covenant, make you complete in every good work to do His will, working in you what is well pleasing in His sight, through Jesus Christ, to whom be glory forever and ever. Amen." (Hebrews 13:20-21, NKJV) 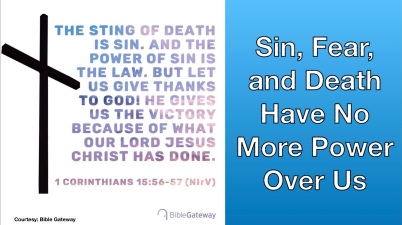 Message of the Day: Sin, Fear, and Death Have No More Power Over Us

"The sting of death is sin. And the power of sin is the law. But let us give thanks to God! He gives us the victory because of what our Lord Jesus Christ has done." (1 Corinthians 15:56-57, NIRV)

On April 14, 1521, Rajah Humabon, king of Cebu, and his wife were baptized on the shores of Cebu. According to Pigafetta, the king "wished to become a Christian" he even requested Magellan "to let some of his men remain [with him], so that he and his people might be better instructed in the faith." Then a wooden cross was erected "in the middle of the square," after which they were instructed by Magellan how to give reverence to the cross. 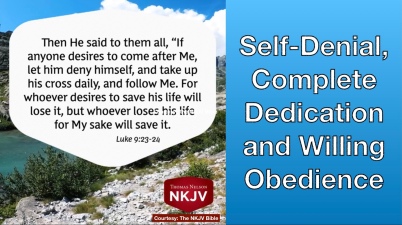 Message of the Day: Self-Denial, Complete Dedication and Willing Obedience

Then He said to them all, “If anyone desires to come after Me, let him deny himself, and take up his cross daily, and follow Me. For whoever desires to save his life will lose it, but whoever loses his life for My sake will save it." (Luke 9:23-24, NKJV)

Message of the Day: Christ’s Death Broke the Power of Sin

"...who Himself bore our sins in His own body on the tree, that we, having died to sins, might live for righteousness—by whose stripes you were healed." (1 Peter 2:24, NKJV)