On February 22, 1889, Dr. Jose Rizal wrote a letter to a group of young women of Malolos supporting their plan of putting up a night school. 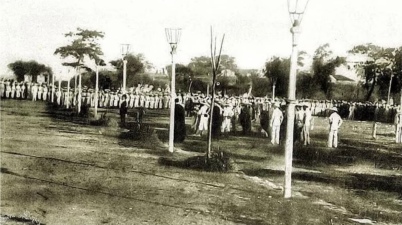 On December 30, 1896, Dr. Jose Protacio Rizal, the greatest man of the Malayan race, was shot to death at Bagumbayan (present day Luneta or Rizal park), Manila, by a firing squad of native soldiers, on the accusation of political conspiracy and sedition, and rebellion against the Spanish government in the Philippines.

October 6, 1896, Rizal was Taken from Montjuich Castle to a Ship to Sail Back to Manila

Today in Philippine History. On October 6, 1896, Dr. Jose Rizal was awakened by the guards and escorted to the grim and infamous prison-fortress named Montjuich castle (Castell de Montjuïc) a political prison associated with many cruelties in Montjuich, Barcelona, Spain. he spent the whole morning in a cell.

The Birth of Jose Rizal

Today in Philippine History. June 19, 1861, Dr. Jose Rizal, a multi-talented illustrado, hero and martyr was born in Calamba, Laguna. As we commemorate his birth, let us look at some of the facts about his birth.

The Basis for Jose Rizal’s Noli Me Tangere

The idea of writing a novel came out when Rizal realized that Filipinos were almost an unknown nation in Europe. In Madrid they mistaken to be Chinese. “Street urchins ran after them shouting ‘Chink! Chink!’ And indeed, half in self-mockery, half in defiance, the Filipinos in Madrid referred to one another as ‘slit-eyed Chinese’” (Leon Ma. Guerrero, The First Filipino).